Here at CB HQ, we all love baking. We love food in general for that matter! And with Christmas coming up, we found ourselves sharing our childhood Christmas culinary traditions and favourite festive recipes.

From Renee’s knockout Chrissy Tree Pav to Gaëlle’s Bûche de Noël, here are some of our festive culinary delights from around the world. And for you keen Curiositeers out there, we’ve even given you some cool science behind the recipes! 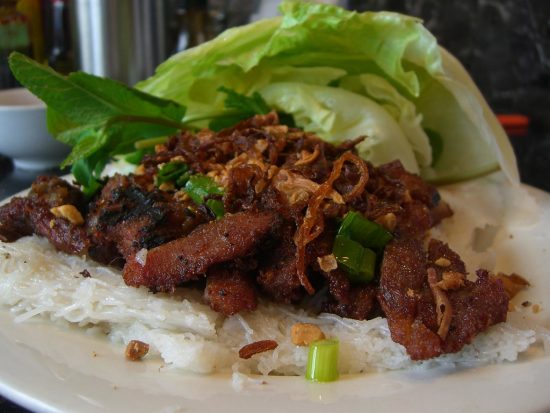 Arthur (aged four and three-quarters) has been chatting to his Ba Ngoai (pronounced “bang why”) about the delicious meal she cooks at Christmas time.

She lives in Australia, so the traditional Vietnamese Bahn Hoi Heo Quay is infused with Eastern Australian influences.

First, let’s take the Heo Quay. This is the crispy roasted pork belly that’s prepared on Christmas Eve. Ba Ngoai starts by rubbing a generous among of sea salt crystals over the pork belly and some olive oil. She then scores and marinates the underside of the pork with crushed garlic, Chinese five-spice, and a dash of light soy sauce. The pork then rests overnight in the fridge.

On Christmas morning, she wipes off the salt and cooks the pork in the oven for 40 minutes until the skin is golden, blistered and crunchy. Hmmmmmm…!

The banh hoi (rice vermicelli) noodles are soaked in cold water for 20 minutes and then cooked in boiling water. They’re kept in their rectangular block shape so they can be brushed on one side with spring onion and garlic chive oil, then rolled up so they can be dipped in fish sauce.

The science bit:  Caramelisation and the Maillard reaction are in play here. When we heat sugars, the molecules break up and start to attach to other molecules like other sugars and proteins. These chemical reactions make new colours, smells and flavours. Caramelised food is SOOOO mouthwatering because they tickle so many of our taste buds! 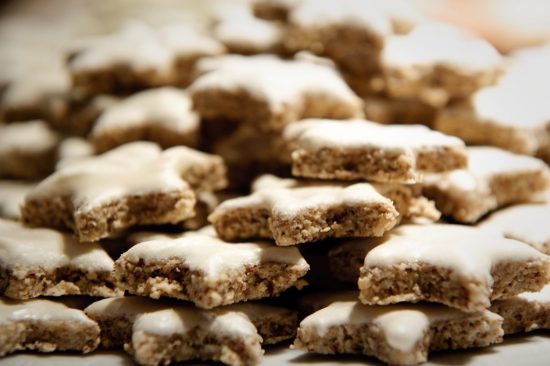 “zimtstern [EXPLORED]” by Matthias Rhomberg is licensed under CC BY 2.0

Helena (aged four and a half) has been asking her Oma (Grandma) about the Zimtsterne she makes every Christmas.

These spiced star biscuits, hailing from South Germany (where Oma also comes from), are chewy on the inside, slightly crispy on the outside, and incorporate all those festive flavours you’d expect –  cinnamon, ginger, almonds.

What’s great about these biscuits is that they’re super easy to bake – a perfect activity for the young Curiositeers in the lead-up to Christmas.

You start by whisking the whites of two eggs until they’re foamy, before adding some lemon juice, and whisking again until they hold soft peaks.  You then whisk in 200g of icing sugar until the mixture is stiff. Set aside a quarter of the mixture to save for the topping.

Next, mix 250g of ground almonds with 2 teaspoons of ground cinnamon and 1 teaspoon of ground ginger with the meringue mix until you have a stiff, sticky dough.

Now you can roll out the dough, dust it with icing sugar, cut out your stars with a cutter, and place them on a baking tray. Spread some of the reserved meringue mix onto each star and bake in the oven for 12-15 minutes until the meringue is set.

The science bit: Cinnamon is an amazing spice! It can be used in sweet and savoury dishes and it is definitely Christmassy! One of the reasons cinnamon is so associated with Christmas is that it is considered a warming spice. It contains some chemicals that are hot on our skin. There is also some evidence that cinnamon causes our blood vessels to dilate, which gives us a flushed warm feeling as blood rushes around our body. 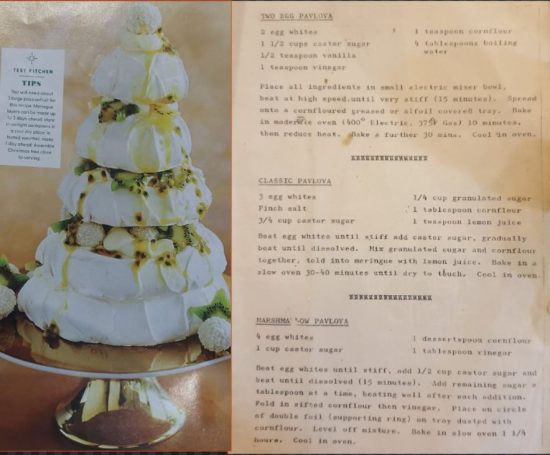 Renee’s been thinking about all the amazing women from her childhood. Nana Barling, Nana Watson, Aunt Jessie: all feisty, strong and nurturing, and so time spent in the kitchen was as much about cooking these qualities into Renee as it was about cooking the food itself!

The Chrissy Tree Pav is the traditional pavlova recipe Renee, her mum and nanas would use to create their four pavlovas, each slightly smaller than the previous, stacked on top of each other and doused in seasonal fruit (usually kiwi and strawberry for those traditionally Christmas colours). What a stonking show-stopper!

The science bit: Seeing egg white transform into meringue is quite something! This is all down to the proteins in eggs (they’re the same proteins in chickpea water if you want a vegan option). For a lovely description of the science of meringue, check out this video:

Boxing day morning for Renee was spent with her Nana Barling, baking the most incredible pancakes using lard sizzling in a hot pan. A killer breakfast extravaganza!

Check out Renee’s OG recipe she wrote when she was just seven: already a scientist in the making: 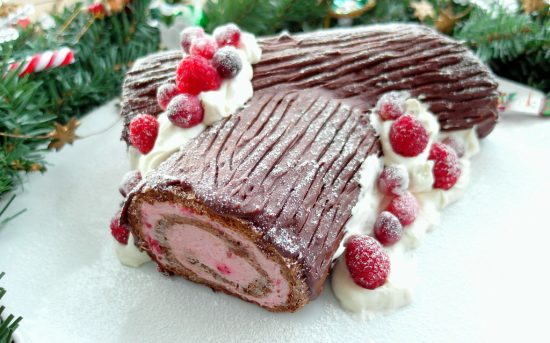 Gaëlle’s been remembering her childhood in Belgium and, while neither her Mamy (Mum) or Boma (Grandma) were great bakers (“I think my Boma has never cooked in her life,” recalls Gaëlle), Christmas would be all about doing the rounds of the local bakeries/patisseries to find the ultimate Bûche de Noël for Christmas.

If you’re wondering what Bûche de Noël is, you’re probably already familiar with it: it’s the Yule Log we all know and love. But why a log at Christmas?

Bûche de Noël originates in Medieval France and was a traditional way of guaranteeing next year’s harvest would be bountiful.

At Christmas time, a log of wood, usually from a fruit tree, would be brought into the home to form the epicentre of family activity. Salt, wine and holy water would all be sprinkled on top of the log before it was lit on fire on Christmas Eve. The log would have to burn for at least three days before its ashes would be taken and used to protect the family against lightning strikes, and the coals used throughout the year in medical potions.

Over the centuries, this ritual was replaced by a Bûche de Noël in dessert form and is usually a mainstay of any French or Belgian festive table.

To make a Bûche de Noël, whisk caster sugar with egg yolks until pale and thick. Melt chocolate over a pan of simmering water and stir into the sugar mix.

Whisk egg whites to stiff peaks and stir a spoonful into the chocolate. Next, fold in the remaining egg whites and pour the batter into a swiss roll tin. Bake for 12-14 minutes until it’s risen.

Turn the cake out, and spread it all over with whipped cream, scatter with berries (and Drambuie if you’re feeling brave). Roll the cake starting along the long side opposite you, rolling the cake towards you. Decorate the log with chocolate buttercream (butter, sugar, cocoa, and a dash of milk).

Finally, use a fork to create the log effect and dust with icing sugar.

What recipes do you remember from your Christmases as a child? What culinary tradition are you passing on to your Curiositeers? We’d love to hear all about your Christmas baking traditions in the comments below!

Have your curiosity cake and eat it with our Bake Off Lab Box. This scrumptious box contains delicious activities that fuse science and baking to get your teeth into. 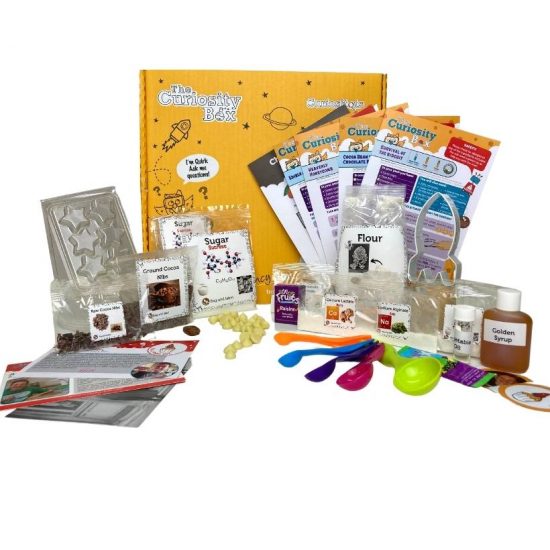 Have your curiosity cake and eat it with our Bake Off Lab Box! This scrumptious box contains delicious activities that fuse science and baking to get your teeth into.

The Bake Off Lab box includes:

🍫 Cocoa Bean to Chocolate Bar – it’s one of the most popular foods in the world, but where does chocolate come from and how is it made? It’s Willy Wonka meets Einstein when you make your own chocolates from scratch! (all variations)

🍯 Heavenly Honeycomb – Like a bubbling witch’s brew can you make fluffy, delicious honeycomb? Or will yours be more like a boiled sweet? (All variations)

🍪 The Ultimate Dunkable Biscuit (Jumbo/Tots only) – People love to dunk a biscuit in their tea or hot chocolate, but what makes a biscuit perfect for dunking? Test different recipes to find the ultimate dunkable biscuit!