With the summer holidays just around the corner, you might find yourself dreaming about your perfect out-of-this-world destination. If so, you wouldn’t be alone. It’s easy to get carried away with the idea of swapping Marbella for Mars or Mykonos for the Moon.

And with the likes of Jeff Bezos and Richard Branson already taking suborbital flights in their own supersonic rockets, we’re reaching a whole new world of travel… that is, for those who can afford it! But can you imagine a world where ordinary folks like you and I get to jet off into space for our holidays?

What is space tourism anyway?

You may well be wondering what on Earth space tourism is, and how it’s different from regular space travel. The main difference is that space tourism is meant for leisure or recreation. That is, just for the fun of it!

But “space tourism” can also be divided into orbital, suborbital and lunar space tourism.

Orbital space tourism will let people fly in a rocket to orbit around the Earth, at speeds of up to 17,400 miles per hour! Suborbital flights are much slower  – if you can call 3,700 miles per hour slow!  These tend to fly right up into space and back again. Finally, there’s lunar tourism. This will involve trips to the moon (and back hopefully!).

The most likely form of space tourism open to paying customers will be orbital, meaning that (for a huge fee) you’ll be whizzed around the Earth at superfast speeds, while you look out on the breathtaking sight of the world below.

What is there to do in Space?

For a long time now, space industry experts have made the assumption that ordinary people like you and me wouldn’t be interested in holidaying in space. I suppose it’s a fair question to ask “why would you want to go into orbit?” There’s no air, let alone cafes, shops or the usual holiday activities we’re used to. It’s nothing but cold, dark…. space!

But how wrong could they be? For most of us, the thought of being able to look down at the Earth from orbit is something we dream about.  Imagine flying around the globe every 90 minutes or so, catching a glimpse of all the extremes our beautiful planet has to offer – ice plains, deserts, mountains and jungles – all from way up above. I mean, there are views and there are VIEWS!

There’s also the view around you. Did you know that stars don’t flicker in space? That’s because there’s no atmosphere between you and the stars. On the flip side, they shine much brighter and they’re somehow more colourful.

And then there’s the zero gravity thing. Just everyday actions like moving around are different when you’re weightless. That is, they’re much more fun! Even the important astronauts who’ve lived on the International Space Station have said they couldn’t resist playing pranks on each other or trying out some mid-air gymnastics from time to time!

Imagine the games you can play in a zero-gravity environment? Would a zero-gravity “hotel” include weightless rooms where you could practice your moves ready for a “floating race” from one side of the room to another or even an aerial acrobatics competition?

So, picture this: you and your mates on holiday in space, sitting at a large window, gazing out at planet Earth below you before you float off for a game of weightless acrobatics. How cool would that be?

But could this ever be possible?

The answer is that it is already happening (sort of). I mean, there may not be big weightless hotels where intergalactic holiday-makers float around watching the world go by (literally). But the big space giants like Virgin Galactic, Space Adventures, Blue Origins and Space X are already chartering commercial orbital and sub-orbital space flights to high-paying customers. NASA even predicts that the International Space Station will be open to travellers by 2024 and will allow people to take part in actual spacewalks.

The thing is, there’s both a long waiting list for commercial orbital trips and also an out-of-this-world price tag. So, unless you have a spare $100 million lying around and have ten years to wait, it might be a while before we mere mortals will be joining the likes of Elon Musk and Richard Branson and jetting off to outta space for our summer hols.

If you can’t wait that long, why not try our Terrific Scientific Bottle Rocket experiment. It may not take you to the moon, but it’ll be fun nonetheless!

And if all this has got you thinking about the universe, you should take a look at our Cosmic Blast Off Space Kit, which includes: 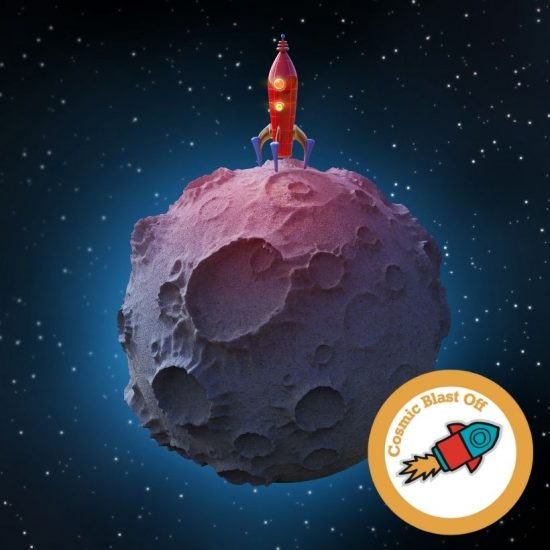