‘Tis the season to be jolly… and often that means giving and receiving gifts – a tradition that goes all the way back to the very first Christmas when it’s believed that “three wise men” travelled from the East to bring gifts of gold, frankincense and myrrh to Jesus, the newborn son of God.

But in true curiosity form (we love to take some of our best-loved stories and traditions and put them, almost literally, under the microscope) we’re going to take a closer look at the science behind these festive favours.

But how does gold get its fabulously unique golden hue?

To answer this, we need to delve into the world of electrons and Einstein’s theory of relativity.

In chemistry, we learn that everything is made up of atoms that are made up of a nucleus surrounded by a shell of electrons. Most metals appear grey because their electrons resonate most strongly with ultraviolet rays, and so reflect all wavelengths of visible light back. This makes them appear silver and reflective.

Clear as mud or good as gold? Here’s Up and Atom explaining this phenomenon in more detail:

Frankincense, a traditional perfume, is a sort of milky substance that comes from the Boswellia plant, indigenous to East Africa, India and the Arabian Peninsula. The Boswellia plant grows really tall (up to about 5 metres) and has pretty flowers with white petals and red or yellow centres. The sap is extracted from the trunk of the plant and is later burned to give off fragrant smoke.

But what exactly happens when incense burns?

Firstly, the compounds within the resin (these are called boswellic acids) that make up the majority of the resin, are too heavy to contribute to the smell. But there are some more volatile compounds in the resin called octyl acetate, octanol and some terpenoid compounds.

But there’s something else going on in frankincense that might explain why it was such a special gift on the first Christmas. Also present in the frankincense resin is a compound called incensole acetate which may have anti-anxiety and anti-depressive effects.

On to mysterious myrrh (what on earth is myrrh anyway?!).

Myrrh is another resin, this time reddish-coloured, that comes from the Commiphora – a tree native to northeast Africa and the Arabian Peninsula.

The tree itself can grow up to 3 metres and has spiny branches with only very sparse leaves. And the method of extracting the resin is almost identical to that of frankincense but has traditionally been used for different purposes. In Ancient Egypt, it was used as a perfume but has also been used for medicinal purposes – and even in toothpaste because of its antiseptic properties.

But what is it about Myrrh that makes it so scientifically special?

First of all, Myrrh has a wonderful aroma. Myrrh is made of a number of compounds from the (tongue-twisty word alert!) furanosequiterpene family. In this family are lindetrene, dihydropyrocurzerenone, and furanoeudesma-1,3-dione. It’s these compounds that give it its calming woody smell.

Secondly, myrrh has some fabulous medicinal properties. Its furanoeudesma-1,3-dione has been found to be a pain-killer, acting on the brain receptors that are responsible for the perception of pain. Myrrh has also more recently been found to have anti-inflammatory properties, although this has yet to be tested on humans. 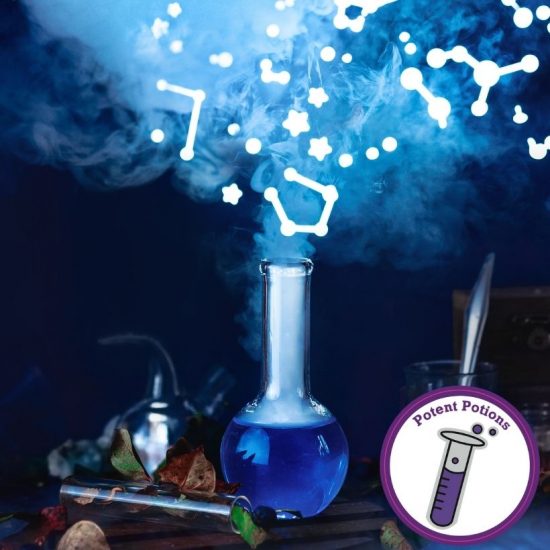 This is a bit of a messy one and is for all those curious kids who love mixing things together then seeing what happens –  which is most!  This box contains 4 activities that bubble, heat up, foam, ooze,  and change colour.

🌈 Colour Changing Potion  – craft a potion that’s the envy of any witch or wizard!

💭 Big Bubbles (Jumbo/Tots only) – make the best bubble mixture ever and engineer a bubble blower for enormous bubbles!

⚛️ PLUS a collectable Molymod mini kit! *Jumbo only*