Here at Curiosity Box, we’re always looking to delve into the science behind some of the world’s most amazing spectacles. And at Christmas, we’re surrounded by those. From the mystery of the Star of Bethlehem to the redness of Rudolf’s nose, there are plenty of questions that, for anyone as curious as we are, simply need answering!

But one thing that comes up time and time again is just how Father Christmas, Santa Claus, good old Saint Nick (whatever you choose to call him) manages to fly his sleigh all around the world in just one night. It’s an incredible challenge, especially as it gets harder each year as the population increases.

Is it the sleigh that flies… or the reindeer?

The problem with this is that neither the sleigh nor the reindeer has wings, motors or propellors, making it rather mindblowing that either is responsible for flying.

In the Arctic Circle where Santa Claus lives, there is a massive 2 MILLION reindeer. But as far as we know, reindeer haven’t yet evolved to fly. And, if by chance Santa has managed to construct some mechanical reindeer wings, they’d have been very awkward for a fleet to wear whilst also pulling a sleigh full of gifts and a fully grown man with a belly like a bowlful of jelly!

So what about the sleigh itself? Given that Santa Claus has been delivering presents around the world for over 2,000 years now, and that aircraft flight has only happened in the last 200 years, he wouldn’t have had the chance to be influenced by some of the early aircraft designers like the Wright Brothers. And jet engines weren’t invented until the middle of the 20th century.

This brings us to the scientific phenomenon known as magnetic levitation. Ok, strap yourselves in… we’re off on a magnetic sleigh ride:

We all know about magnets. They have two magnetic poles, a north pole and a south pole. Like poles repel and unlike poles attract.

But what’s amazing about magnets is that they’ve been used in certain transport systems including “maglev trains”. Unlike normal trains, these don’t actually touch the tracks. That’s because the magnets on the bottom of the train are repelling the magnets on the tracks, making the train float above the tracks. The force of the magnetic lifting manages to counteract the weight of the train due to the force of gravity. Maglev trains float a massive 10cm above the track, as if by magic!

So, taking us back to St Nick and his crew, if they were to put magnets on the runners of the sleigh and the reindeer shoes, and pass electricity through a superconductor, they’d create a magnetic field. Then, to get off the ground, that field would need to push against another magnetic field… which is the Earth’s own natural one.

This would mean that Santa would have to carry a battery to switch on the sleigh’s magnetic field (preferably a recyclable sodium-based battery!).

Ok, so that’s the levitation bit. But what about the sheer enormity of the task at hand?

We’ve worked out that Santa Claus needs to deliver presents to roughly 98 million children around the world, and that he has 31 hours to work with because of the different time zones and the rotation of the Earth (if he travels East to West).

That leaves him 1/1000th of a second to park up, get out of the sleigh, leap down the chimney, fill up the stockings, grab a quick mince pie, carrot for the reindeer and sip of milk, and get back up the chimney, in his sleigh and off to the next house.

If we assume that these 98 million houses are evenly distributed across the Earth (which of course they’re not), he must account for 0.78 miles per household, and a total trip of 75.5 million miles. And that doesn’t even account for time to stop and feed the reindeer!

This all means that Santa’s sleigh is moving at 650 miles per second (that’s 3,000 times the speed of sound). This is some fast work for Santa and his crew!

The verdict: we’re halfway there!

Sorry folks, we’ve had our experts working on this and still haven’t found a perfect answer. We may have worked out how the sleigh flies… and that’s a GREAT start. But the speed at which he gets around every boy and girl remains a mystery!

And of course, there are plenty of questions that scientists still haven’t got a satisfactory answer for. So I guess we’ll keep on thinking and experimenting… and you should too!

Introducing the Think and Tinker box 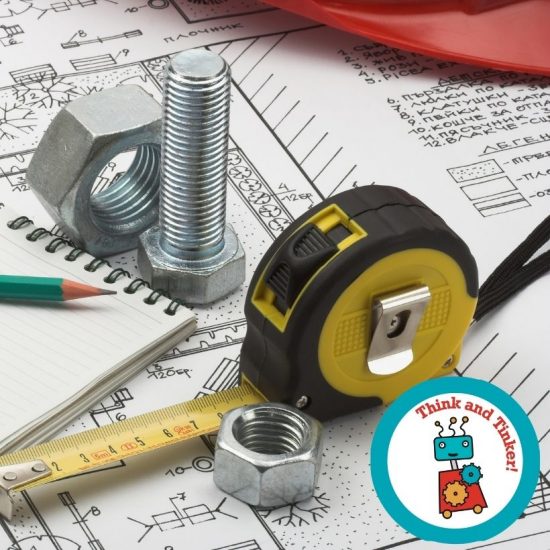 Are your kids curious about how things work? Do they like to take things apart to try and figure it out? If the answer is “yes” then this is a perfect box for your budding engineer.  Great engineers will tell you that things are rarely perfect the first time and this box is all about planning, doing and reviewing and doing again!

Our Think and Tinker box contains:

🎯   Cool Catapults (Jumbo & Nano only) – build a variety of different types of catapults then see which one shoots the furthest.

✂️   Ball Run (marble for Jumbo, paper ball for Tots) – build your own ball run with a variety of materials and then test it!

🪣.  Well, Well, Well (Jumbo & Tots only) – Create a pulley system for a well and see how fast you can scoop all the water.

🐊   Greedy Grabber (Tots & Tots Nano only) – construct a device to help you pick up objects.