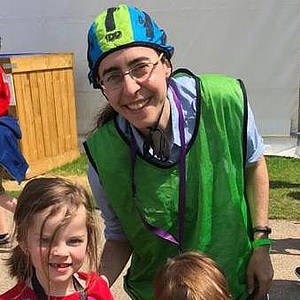 Did you know that the BIGGEST living thing on earth is a fungus? It’s a whopping 4 square miles in size and it’s slimy, a bit gross and a lot amazing! The Humungous Fungus is made up of lots of cells, making it a Multi (many) Cellular (cells) Organism (living thing). Lots of things around you, and in fact you yourself, are a multicellular organism. Have you ever stopped to wonder how something as complex as a human came about?

These sorts of questions have made me very interested in finding out more about multicellular organisms. Like why do they exist and how did they evolve?? So I have been studying at the University of Oxford, exploring super slimy green algae, trying to find some answers.

In my lab I had been growing lots of single celled green algae and one morning, I decided to add a predator into the mix. The predator started eating the algae, it was like a slimy MASSACRE! But then, the algae started sticking to one another forming gloopy blobs! These multicellular blobs were too big for the predator to eat so the multicellular blobs won! It was a victory for team work and a victory for slime! and got me thinking that surviving a predator might be important for the first step in the evolution of multicellular life!

Now, I’m moving onto another very interesting topic. What is it?! Find out by following me on the streets of Oxford or social media! I’ll keep you updated! Farewell and, most importantly, follow your dreams!